Central Park Place on Marsh Road is arguably the most attractive retail center in the region. It’s location, opposite the sprawling Meridian Mall, is outstanding. The east side …
MickeyHirten 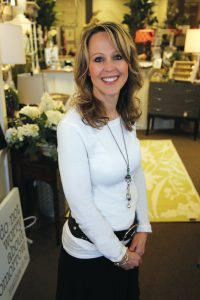 Central Park Place on Marsh Road is arguably the most attractive retail center in the region. It’s location, opposite the sprawling Meridian Mall, is outstanding. The east side communities of Okemos, Haslett, East Lansing and Williamston are the area’s most affluent.

So why isn’t Central Park Place thriving? Retail businesses, once the lifeblood of the shopping center, are abandoning the property. Orvis, Pendleton Woolen Mills and Retail Therapy all left this winter, adding to an exodus that includes Brilliant Sky Toys & Books, Morning Dance Gallery, Central Park Fitness, Therapeutic Massage and others.

Robert Phipps, managing partner of Central Park Place LLC, the center’s owner, said the decline started with the Great Recession in 2007 and 2008.

“It had been 100 percent filled up until the crash and economic downturn. It catered to a lot of small businesses and a lot of them had been there for 10 or 20 years,” he said.

Phipps has engaged CBRE|Martin to handle leasing, a task managed by the firm’s senior vice president, Shawn O’Brien. He said that a weak retailing market on the east side of Lansing during the last three or four years accelerated the decline.

O’Brien, however, sees a change. What he termed “negative absorption” has shifted to “positive.” Other than Central Park Place and the nearby shopping center on Central Park Drive, retail space is becoming scarce in the prime Okemos shopping district along Grand River and north to ALDI and Walmart. 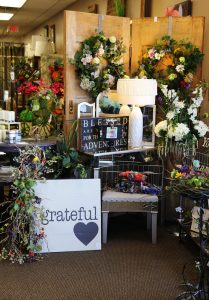 Meridian Township Assessor David Lee supports O’Brien’s assessment. “We are seeing lower vacancy rates and a slight increase in rental rates,” he stated. As for Central Park Place, he suggested that vacancy rates are cyclical. He said that properties along Marsh Road are prime real estate, but that it probably hasn’t returned to the highs experienced before the downturn.

When Central Park Place was developed in 1987-1988, the target tenants were upscale specialty stores. “We built it for the finer merchants in the country, to attract them to the greater Lansing area,” Phipps said. It was a strategy based on his business and personal preference. “I like service and like to be known when I visit a store.”

Phipps, whose development also extends to the building on the south side of Central Park Drive, acknowledged the challenging retail market, but, he also suggested that regulations and bureaucracy make Meridian Township a difficult place for businesses. “In a general sense, to get regulation or permits is harder today than 25 years ago.”

He was particularly critical of the township’s sign ordinances, which he said too often prevent stores from identifying themselves. He cited Orvis as an example of a store with front and back entrances facing different roads but was allowed just a single sign.

“We feel like we are the enemy. I can understand not wanting large signs. We all want them to look nice, not a bunch of flashing lights,” he said.

However, Meridian Township’s appeal is that of upscale, uncluttered setting.

“We understand the perspective of the business owners in the community,” Director of Community Planning & Development for Meridian Township, Mark Kieselbach said.”The sign ordinance was put into place to preserve the environmentally conscious ascetic of the township and make sure sight lines remain clear. We encourage all businesses to join us in discussion to find options that work best for them in promoting their business.”

Even with the improving economy and tightening real estate market, restocking the shopping center with the past mix of retailers may be difficult. 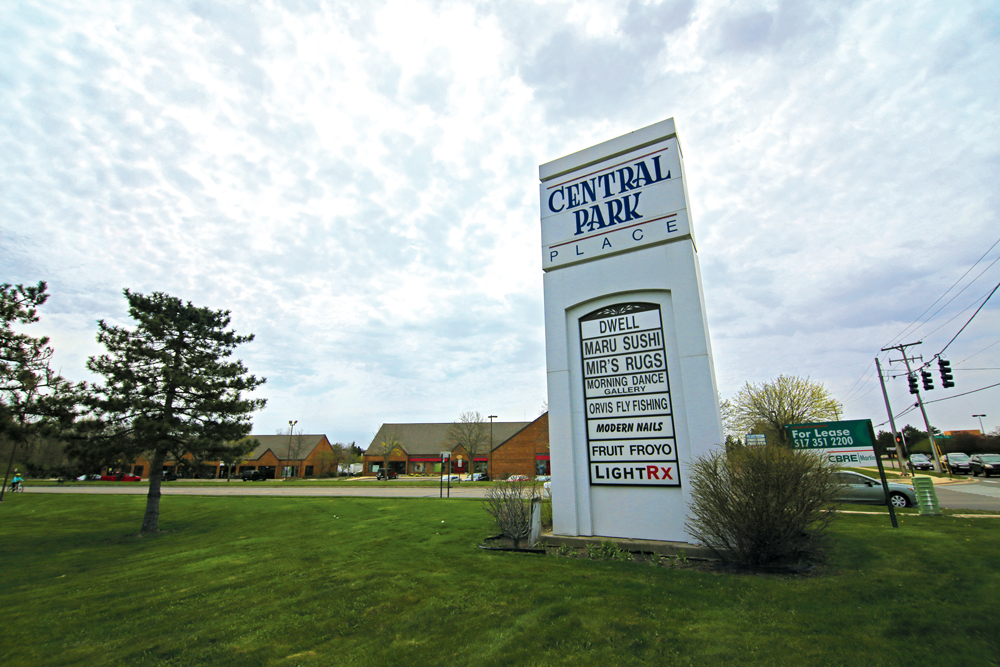 O’Brien suggested that medical and non-traditional retailing, perhaps even office space, may be interested in locating in the shopping center.

“You look for the highest and best use. Look at Meridian Mall: When Planet Fitness went in there, that was non-traditional retail use,” said O’Brian.

He said there is a “significant” tenant lease being negotiated. Phipps talked of two new leases for the shopping center, though he declined to provide details. He said that lease rates for the Central Park Place – $12 to $14 per square foot – are competitive with those in the market.

O’Brien has a broad view of the retailing market and said boutique retailers are struggling. “At some point you need tenant energy. That has been missing.”

He said that the demand for medical urgent care centers is strong and that they are looking to locate in retail centers. O’Brien added that the growth in these operations also reflects the changing demographics of the community.

Dwell, which specializes in “eclectic, fashionable, one-of-a-kind accessories and gifts,” is one of the larger stores in Central Park Place. It is an explosion of color and taste: lamps, pillows, planters, flowers, baskets and furniture. It has ranks of satisfied customers, Facebook postings praising the store and its products, from customers in the Lansing area and from outside.

But it’s difficult business, said owner Tami Jackard, because of the decline of the Center.

“Since I opened in September 2014, five retailers in this complex have either left – gone to a different area – or have retired,” Jackard said. “We don’t have an influx of people like we used to.”

She isn’t sure that Central Park Place can continue as a retailing shopping center, suggesting that it may be more suited to office space.

Jackard, with 16 years of retailing experience in Okemos, said it is very difficult for small boutique retailers to compete. Before opening Dwell, she worked at Naturals Design Studio.

When it closed, and with the closing of Seasons, both of which sold home goods, gifts and accessories, she saw an unfilled market niche.

But the pace of retailing change has accelerated, even since Dwell opened.

“When I started in retailing we didn’t have as many chain stores. We didn’t have online shopping and computers. If you wanted to buy you had to go out and go shopping,” Jackard said.

“We kept losing retailers. The less stores you have, the less traffic there is going to be. You don’t get new customers who might be walking by. Now where I am so many people just walk in,” she said.

For stores less dependent on walk-in traffic, the vacancies are less of an issue. Mir’s Rugs and Carpets has been at Central Park Place since 1987 and is a destination retailer with customers throughout the state, nationally and even internationally, said store manager BeaJaye Bedell, adding that the business is doing well.

“The two [restaurants] we have are doing quite well. There’s a market there,” Phipps said, adding that he has tried to interest other restaurants in the location. And there are solid business reasons to attract the restaurant trade.

“Food users are driving the market,” said O’Brien. And even better, he added, “They pay higher rates than retail.”