While Lansing residents may grumble as traffic begins to slow due to construction, those cranes rising above the highways and sometimes causing detours along our normal routes a…
Allison Spooner

While Lansing residents may grumble as traffic begins to slow due to construction, those cranes rising above the highways and sometimes causing detours along our normal routes actually mean a positive shift in the greater Lansing commercial real estate market.

According to Tricia Foster, senior managing director and chief operating officer of CBRE|Martin, a commercial real estate organization, the real estate market is seeing the same trends, globally, that it has over the last few years.

“They are trying to hold them ‘lower for longer,’” continued Foster, “to see how things play out.”

While the global market is following typical trends, Lansing’s market is taking valuable steps toward improvement. The cranes we are seeing locally, which, according to Foster, we haven’t been seeing a lot of in recent years, support the statement that development is on the rise in Lansing, contributing to a lower unemployment rate of five percent in the area. In February, greater Lansing added 242,000 jobs and many of these were in retail, healthcare and construction. Foster added, “the longer this trend continues, the better.”

With people at work and businesses growing, the demand for space also grows. This means rent in commercial properties is expected to rise by at least three percent, but that vacancy is at a low 13.7 percent, meaning the buildings we have are being used and filled.

While the buildings we have fill up, the demand for new buildings and a new type of building, rises. Much of the construction that is currently underway is answering a demand for mixed-use buildings, which, according to Foster, is a trend fueled by millennials and retirees. Both groups want walkable areas that require little upkeep and have everything they need right where they are. Lansing will continue to see more cranes and more growth as more mixed-use buildings are planned, including Vista at the Heights, SkyVue and more. Lansing also continues to welcome retailers like organic food stores, auto parts stores, apparel stores, banks and restaurants. Some are building new developments while others are filling in empty buildings, helping to keep the vacancy rates steady.

As the big businesses in Lansing, like Michigan State University, Sparrow Health System and Jackson National Life Insurance Company® continue to grow, the unemployment rate will remain low and trends will continue to move toward higher density, urban areas. As new buildings pop up and existing ones are improved, investors in commercial real estate remain cautiously optimistic (low borrowing costs, rent growth and solid fundamentals lead to an attractive market for investors) as the recovery of the market, seen over the last five years, continues.

This improvement can be seen in the residential real estate market as well. 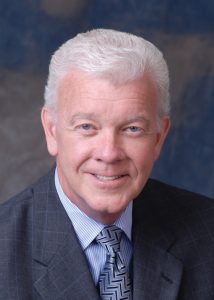 “We’ve made up 30 percent of what we lost in 2008 when the market dropped,” said Bill MacLeod, president and partner at Coldwell Banker Hubbell BriarWood. The crash severely affected the tri-county area, MacLeod added. “When people lose their homes, they lose their futures.”

While he said he’s never seen anything like the drop experienced during that time, MacLeod is optimistic that in another year, things will be back to where they were and in the next month or so, like every year, the market will be strong. “March, April and May are the strongest months, no matter the year,” he said. But, it also fluctuates and predictions this month could be vastly different next month.

At this particular moment, MacLeod says it’s a great time to be a seller and if putting a house on the market is in your view, he recommends doing it now.

“Coming into April, we saw a record number of sales.” June, July and August will stay strong but the market drops again in the fall and through the winter, coming back again in the spring. The recovering market is being supported by extremely low interest rates. “What we are seeing is not normal,” he said of rates that are at eight to nine percent. “But, once the market steadies again, they will go back to normal.” He foresees another strong year like last year, only better.

A burgeoning market is being supported by the trends MacLeod is seeing in the growing use of technology within the real estate industry. Buyers no longer have to be in the same area to look at a home and decide to buy. With the introduction of FaceTime, video chats and even drone technology, spouses can give tours to their out-of-state partners and avoid costly travel.

With the market shifting, the business must also shift, and MacLeod said they are seeing more teams rather than individuals, with Coldwell Banker Hubbell BriarWood following that trend. With more than 200 agents, they represent one-third of the dollars spent in the market in greater Lansing.

“We don’t brag about how big we are, but size does allow you to be competitive, benefit your clients and improve your agents.”

The growth in both of these markets means nothing but good things for the businesses and residents of Lansing. “Everything is connected locally,” said MacLeod. As both industries continue to grow, the industry that was once so bleak can finally see a light at the end of the tunnel.